Maintaining Custody As A Military Parent 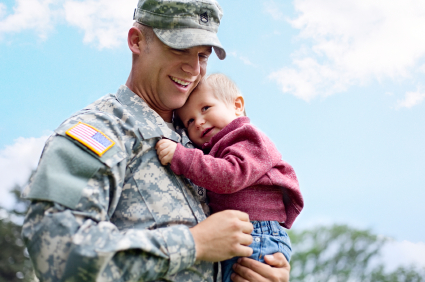 In 2009 there were more than 10,000 single parents deployed on active military duty. What happens to these children and how are they taken care of? One thing to keep in mind is that service members are subject to military law which differs from state laws. For example, child support for military parents is calculated differently than other civilian parents. This is where the state courts and military courts will have to work together.

Something to keep in mind is that if the deployed parent’s family is not allowed to visit, the service member may in some situations have the courts delegate the visitation to a specific family member such as a grandparent or sibling. The key to this as is to any other decision making in family law, is that it is in the best interest of the child and that the child has a standing relationship with this individual.

The problem with the above situations however, is that when the military parent returns from deployment, the original custody orders do not just revert back. The service member will actually have to return to court to petition for a new custody order. Many issues can arise out of this situation depending on the length of deployment and the age of the child. If it is a lengthy deployment and the child is young, they may form a stronger attachment to the new custodial parent and not want to go back. In other cases, where you might have been the primary custodial parent, it may now be changed to joint custody. Regardless of the situation, you will have to obtain a new court order.

There are laws out there such as the ‘Servicemembers Civil Relief Act’ but more support is needed. Currently, there is new legislation that will hopefully be included in the 2013 defense policy bill and be enacted into law. The new legislation is designed to protect our service members of having courts alter their custody orders while deployed. What needs to come to light in the court system is that our deployed military should not be worrying about losing custody of their children while they are serving their country.

If you are a military parent make sure that you are tracking updates of state legislation affecting military deployment and custody and other states’ cases. A good resource is ‘The Judges’s Guide’ by Mark E. Sullivan which is a guide to the ‘Servicemember’s Civil Relief Act’. In addition, The American Bar Association’s new “Legal Guide for Military Families: Everything You Need to Know About Family Law, Estate Planning, and the Servicemembers’ Civil Relief Act”  is a great resource as well.  Do your research before you get your deployment orders so that you will be able to make the best decisions for both you and your children.

Read more about child custody while in the military at –>www.AboutTheChildren.org