Here at ATC we have been blessed with a wide range of gifted and collaborating writers from many walks of life, each with their own multifaceted experiences from their professional careers, relationships, human connections and insights.

It is their goal to help bring together the most relevant and up to date information on parenting, co-parenting, relationship building, raising children, and encouraging interests to bolstering fellow parents to be prepared for any family matter.

Be sure to check out their own blogs and other online influences they use to educate children, parents and families.

Price was born in Santa Barbara CA, and grew up on a small horse ranch. Traveling extensively through Europe and South East Asia during his college years he acquired a taste for teaching and writing while working with students at a Chinese university. Upon returning to the U.S. he studied at Humboldt State University where he earned his bachelors degree in Philosophy. Returning home to care for his elderly father, he now works for About The Children and also works with at risk youths at a local organization and is studying clinical psychology to become a professional therapist and start his own practice.

Originally born in California and shortly after moved to Colorado. At age 11 his parents divorced. After the Divorce he moved with his mother and siblings to Denver, CO where his curiosity peaked about engineering and law, torn between which to purse. Moving back to California he pursued a mechanical engineering degree at San Diego State University. Currently he works with ATC in assisting parents and families as an advocate.

Born in NYC and moved to CA at the age of 13 yrs. Going from a big city to a small town (Santa Barbara) was quite a culture shock. She attended UCSB majoring in political science. Later, she ran and operated her own daycare for 14 years and has a 25 year ongoing catering business during which has raised her two step children into young adulthood. She now works with About The Children  bringing her motherly knowledge and baking talents to support the staff and members. Currently, she is also looking forward to grand children soon. As a Disney Freak, when retiring she plans on spending continued time traveling the world with the title ‘Fairy Godmother’ in the Disney Parade.

Brenda has a Master’s Degree in Clinical Mental Health Counseling and a BA in Education. She’s been a teacher and school counselor for over 10 years and a service provider for children in foster care and domestic violence. She earned the “Powerful Connection” award for teachers in 2003 & 2004 and is a writer and inspirational speaker. 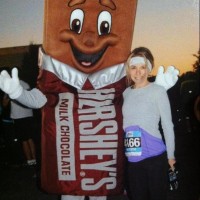 Born and raised in New York and a 2000 graduate from the Frank G. Zarb School of Business at Hofstra University, Meredith continues to call Long Island home. After working in the promotion industry for a few years after college, she traded in her office job for the opportunity to be a stay-at-home mom. While divorce and becoming a single mother changed the logistics of her life’s plan, Meredith took the situation as an opportunity to build a new life for herself and her son. Her positive and healthy attitude was recently featured on the Dr. Oz Show, where she discussed her “healthy form of revenge” after divorce. An avid runner, baker and cook of all things healthy, Meredith turned her passions into a career by starting a health and wellness blog, The Cookie ChRUNicles, where she continues to inspire others on a daily basis.